Lambing
On Tuesday, class 6G went on a school trip to Willows Activities Farm and learnt all about lambing! Did you know, lambs that can’t be fed by their mothers have to be bottle fed up to 7 times a day?
Parents
A female sheep is called a ewe and a male sheep is called a ram. If a lamb is a male, it will be called a ram lamb, and if it is a female lamb, then it will be called a ewe lamb. A cade is a baby lamb that is either an orphan or a triplet.  If a ewe only gives birth to a single, and another gives birth to triplets, the workers will  try to get the single’s mother to accept one of the triplets by rubbing it against the ewe after its birth; this way, it results in the lamb smelling like the parent (which is how they recognise their children).  If a lamb tries to suck from a ewe’s udder, but the ewe is not its mother, then the lamb will start to call for its parents.
Once a lamb is born, the workers will hang it upside down, so that all the fluid inside of it will come out.  It is also important that the lamb comes out head first, otherwise it might get stuck if coming out backwards and will try to catch air but will sadly suffocate. So if it does come out backwards, the workers have to pull it out as fast as possible.  Once a lamb is born, the workers will put a rubber band around its tail so that it will eventually fall off. They do this because in the summer time, when they play on the grass, faeces can get on the end of their tales which could potentially attract flies and disease.  So, they put rubber bands around the end of the tail , so after a few weeks, it will fall off.
Markings
When ewes are pregnant, they get different types of markings in different types of colours on their backs; depending on how many lambs they are having.  An orange spot on their behind signals that they are having triplets.  If the ewe is having twins, then there will be an orange spot on the shoulders.  Finally, if a ewe is having one single lamb, then they will have a blue spot on their backs.  They are labelled 1 to 100.  Lambs are labelled the same number as their mothers.
Did you know a ewe is pregnant for five months?

The pregnancy process
During the process of the ewe’s pregnancy, it will go through some strange side-effects.  One of the tell-tale signs of pregnancy is that it will start to make space in the hay with their hooves to make a nest-like space for them to quietly sit down away from all the other ewes and lambs.
We hope you have now learnt a lot about how lambs are born!

By Isabella and Megan  in 6G. 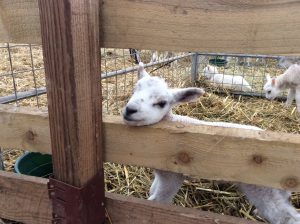 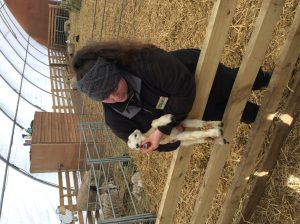 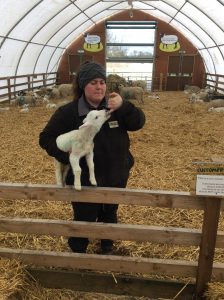 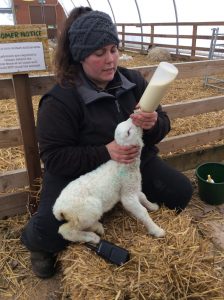