Year 3 & 4 Boys v Garden Fields
The boys hosted a return game against a very strong Garden Fields team on Monday. The previous game had been exciting and very close, especially as Garden Fields had a whole team of quality Year 4’s. Starting well, making the right decisions and passing really well, it was a tight first ten minutes which ended 0-0 but not many chances for either team were created. Archie E-R, Luca and Fraser protected Year 3 keeper Archie N brilliantly and he himself proved what an outstanding prospect he is.
The 2nd ten minutes was slightly different, as the quality of the Garden Fields midfield gave them a 2-0 lead. That said, Bowmansgreen created several chances themselves but found the keeper hard to beat. Jason, Toby and Ollie worked hard and looked dangerous on the breakaway but with no luck.
The 3rd ten minutes belonged to Bowmansgreen. Firstly the bravery of Ollie created space for Brendon to shoot into the bottom corner to give hope, Ollie then scored an equaliser after good work from Olivier and Brendon. The Garden Fields keeper had to make several good saves to keep them in the game as Bowmansgreen totally dominated. A breakaway goal from Garden Fields was the only real chance they had in this period.
The 4th ten minutes was even until the final five minutes as tiredness told and Garden Fields took advantage of bringing thirteen players and scored three goals to make the final score 2-5.
A thoroughly enjoyable game and despite the result, it shows the strength and depth there is at Bowmansgreen in football terms. With every player in the team excelling, praise must go to the Year 3’s, Archie, Olivier and especially Brendon for their performances in their first matches for the school. 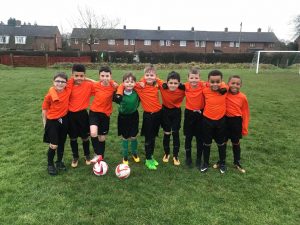 Year 3 & 4 Girls v Skyswood
A team of year 3 & 4 girls, some of whom were making their debuts for the school, went to play against Skyswood on Wednesday. With Charlotte in goal, Ava and Poppy in defence, a midfield of Izzy, Jacey and Elissa and Phoebe playing as a striker, it was the girls from Bowmansgreen who scored first. Jacey put Bowmansgreen ahead with a fine run and finish. Jacey also scored the 2nd goal, again finishing well after good work from Ava and Poppy.
Elissa scored a 3rd goal not long before the end of the 1st third, a good finish from the edge of the area. Verity, Chisholm and Tayla came on for the 2nd third and fitted in superbly as Phoebe, Izzy and Elissa went off and Jacey went in goal, giving Charlotte a chance on field. Skyswood got back into the match with a well worked goal half way through and only good goalkeeping kept Bowmansgreen from increasing their lead.
More changes in the final third saw Charlotte go back in goal, Jacey, Poppy and Ava getting a break, plus Phoebe, Elissa and Izzy coming back on. Skyswood scored the only goal of this third with only 2 minutes to go, meaning that Bowmansgreen held on to win 3-2 in a terrific match. 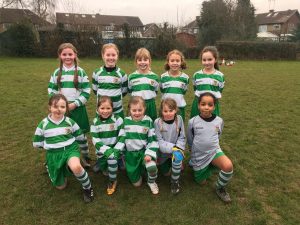 Squad – Charlotte, Jacey, Ava, Poppy, Alissa, Izzy, Phoebe, Verity, Phoebe & Tayla.
Boys B v Killigrew
The boys played the penultimate league game of the season away v Killigrew hoping to win and move into 3rd place. It started very well for the boys in green as they took control of the game and created several early chances, only to be thwarted by the extremely tall Killigrew keeper. Eventually though the deadlock was broken as Dylan sent in a decent cross which got a deflection off a defender and looped over the keeper into the bottom corner. Not long afterwards, it was 2-0 to Bowmansgreen. Tobi, getting on the end of an Evan cross, toe poked into the net.
Despite dominating play and chances in the 2nd half, Killigrew somehow found a way back in to the game and scored with their only chances to make the final score 2-2.
Squad – Archie, Adam, Dylan, Evan, Owen, Daniel, Zeph, Tobi and Zak