Cross Country
Cross Country placings announced on hsaa.org.
Year 5 Boys:
James 17th
Ollie 98th
Year 5 Girls:
Laila 9th and will represent Herts in the National championship in March.
Lacey 130th
Mariya 132nd
Year 6 Girls:
Leila 49th
Emily 116th
Boys B v Margaret Wix
The Boys B team made the short trip to play Margaret Wix in a league match on Wednesday but it proved to be a tough test as Margaret Wix came out the stronger side as they won 4-0.
The game wasn’t without chances for the Bowmansgreen team but once again, they found the opposition keeper in great form. Conceding three goals in the first half of play wasn’t ideal but a more determined showing during the 2nd half was encouraging. Szymon and Zeph showed the way with hard working performances but in the end Margaret Wix proved too strong as the final whistle blew.

Squad – Simon, Zeph, Adam, Hugo, Tiago, Tobi, Evan, Szymon and Owen.
Boys A v SASS
The boys A team unfortunately bowed out of the St Albans Cup yesterday as they lost 2-0 against a strong Skyswood side. The first goal was fairly harsh as an indirect free kick was awarded to Skyswood. The resulting shot ended up hammered into the back of the net. This woke up the Bowmansgreen boys and Ollie, Tommy and James looked lively and nearly equalised just before half time, with James using his pace to go past the defender and shooting just wide. The defensive unit of Alfie, Jack and Freddie were stretched for the rest of the half but stood up to the task.
The 2nd half was a spirited performance as Skyswood looked to double the advantage and Bowmansgreen tried to get on level terms. George came on and was solid in the tackle and pushed forward later in the game to put pressure on the opposition defence. The game ebbed one way then the other but it was Skyswood who got the all-important 2nd goal with only two minutes remaining.
Overall it was a hard working performance from Bowmansgreen but it was Skyswood who were the stronger team but certainly progress has been made in the last few matches. 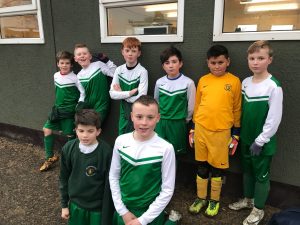