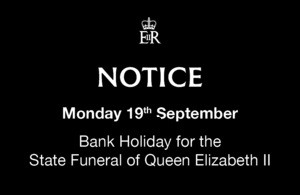 Following the sad news of the death of Queen Elizabeth II last week, arrangements have been made for Her Majesty’s state funeral on Monday 19th September 2022.

The day has been declared a bank holiday. In line with guidance to all schools, we will be closed on Monday 19th September.

Pupils are expected to return to school on Tuesday 20th September.

Further guidance and information including National Mourning and ceremonial events.